Uh-oh, my readership is dipping. Too much talk of the Muslim influence on Spanish flamenco music during my "White Rabbit" discussion? Okay, maybe I strayed a bit.

I think if someone asked me which artist has had his/her songs covered in the most atrocious manner without any positive residual effects on that artist's own career trajectory, I would choose Tommy James and The Shondells. At least, I would today because that's who I want to write about. During the 1980s, Tommy James and the rest of the world had to suffer through terrible renditions of "Mony, Mony" (Billy Idol), "Crimson and Clover" (Joan Jett), and of course Tiffany's "I Think We're Alone Now."—each one devoid of any soul whatsoever. These cover songs are the reason the phrase "crimes against humanity" was coined.

In its original form, "I Think We're Alone Now" is such a clever little teenage love song. It tells the tale of two kids whose parents don't approve of their relationship, forcing them to sneak around to see one another. The premise itself is so easily relatable to anyone who has ever dealt with a lack of approval over their choice of a boyfriend or girlfriend.

But it's the details of the arrangement that work to make this a "bubblegum apotheosis," as described rock critic Lester Bangs. I love how the song shifts into overdrive during the line running just as fast as we can by placing the snare on every downbeat and changing the bass guitar rhythm from straight eighths to a gallop. The rasp in James's voice on the line trying to get away into the night over a bVII in the harmony is a favorite moment for me. But the pièce de resistance and most important musical decision made in the performance and production is to turn the chorus into a whisper by removing the rhythm. This makes perfect sense with the lyric—I think we're alone now/there doesn't seem to be anyone around now—and highlights just how clueless the Tiffany rendition is. (Yes, I know it went to #1—there was a lot of cocaine ingestion in the 80s.) The heartbeat and crickets are a cute touch but it's really the drop in dynamic at the outset of the chorus that makes the moment. Brilliant song.

P.S. Just for fun, here's the original cover for the album I Think We're Alone Now. Consider this: it was considered too suggestive and subsequent pressings were issued with a picture of the band instead. In 1967! Crazy. 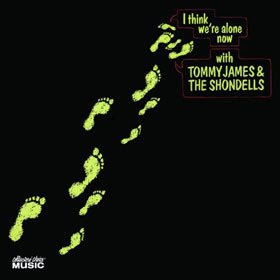 Posted by Frank Caravella at 7:13 PM