Reviewing all the records released in 2009 made me feel old and out of touch. Which is only partially true (on both counts), but more so when it comes to mainstream music releases. A quick survey of the top records told me I probably didn't miss much—we seem to be firmly entrenched in an age of simplistic songwriting and arranging in support of technically stellar, but emotionally stunted, voices. Nonetheless, it's 2009 on 9999 Songs and I'm going to do my best to highlight some standout tracks.

One advantage of being so out of touch is bands like The Black Eyed Peas still seem fresh and listenable to me. I don't mind hearing "I Got a Feeling" or even "Boom Boom Pow" again, whereas I'm sure some of you would rather die. While those tracks represent the biggest hits from The E.N.D., I'm partial to "Meet Me Halfway," which I can amiably admit to hearing first in a DirecTV commercial. This was probably the best way to come to the song as the ad featured what I can only surmise is the best hook of 2009 and leaves out most of the vapid rapping.

In keeping with the mission of this blog, I sat down to figure out what appeals to me so much about this chorus. If you want to get technical (you know I do!), the song is in G Lydian and features essentially just three chords, presented in a variety of forms but most richly as Gmaj7 A6/9 F#m7 Gmaj7. (N.B. I'm ignoring the fact that the very first "chord" of the song appears to be B Minor—the G is added later. Feel free to argue for the key of B Minor in the comments.) I do love me some Lydian mode, though I don't hear the normal expansive quality I've come to expect from that raised 4th—it's pretty soft in this context.

Add Fergie's vocal melody and you get all kinds of additional dissonances added to the chords: a 6th (E) over the Gmaj7, an 11th (B) over the F#m7. These are not passing tones—these are the notes upon which she comes to rest during the early part of the chorus. In the second half of the chorus, we're presented with a nice countermelody in the backing vocals, which plays upon the augmented 4th from tonic (G-C#) and acts as the call to Fergie's response, which accentuates the longing in the lyric through the use of quarter note triplets. It's at this point I'm absolutely sold. 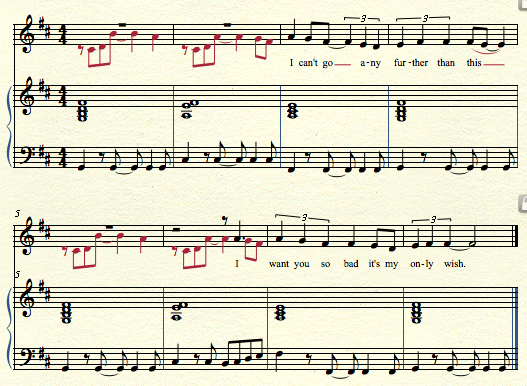 For me, the proof that this is a great chorus came in sitting at the piano and playing it like a ballad, away from the pulsating dance beat and the moon-meets-Garden of Eden video. Even in (especially in?) that context, I found it to be quite striking.
Posted by Frank Caravella at 6:21 PM