I already admitted my fondness for Maroon 5 in a 2012 post so I'm going to ask that we just get that out of the way. I like Maroon 5. Get over it.

And while I prefer the bubbling, pulsating synths of "Love Somebody" to "Payphone"'s four-on-the-floor parade beat and unnecessarily coarse language, I'm featuring the latter to demonstrate how creative these guys can be within the confines of four chords and a drum machine.

Before I get into my main point, let's talk about the key and chord choice. I think most people would assume the song is in E since it's the first chord we hear in the verse, bridge (pre-chorus if you prefer) and chorus. But really, the song begins on the subdominant IV before proceeding to the actual tonal center of B. Maybe it's obvious (wasn't to me!) but I think it's a really interesting lesson for all of us who write songs—you don't always have to start and end with the tonic (I). By tucking the tonic in the middle of the progression (IV-I-vi-V), the key is obscured and the progression plays like an endless loop. The very end of the song is telling. Notice how there is no chord to support Adam Levine's final notes (D#-E-D#-C#-B)? Try singing that last line and landing on E (IV)—doesn't work; try landing on B (I)—it works but it's corny as hell. Someone made a very smart choice to simply omit the harmony.

Now let's take a look at what these guys do melodically over those four chords. 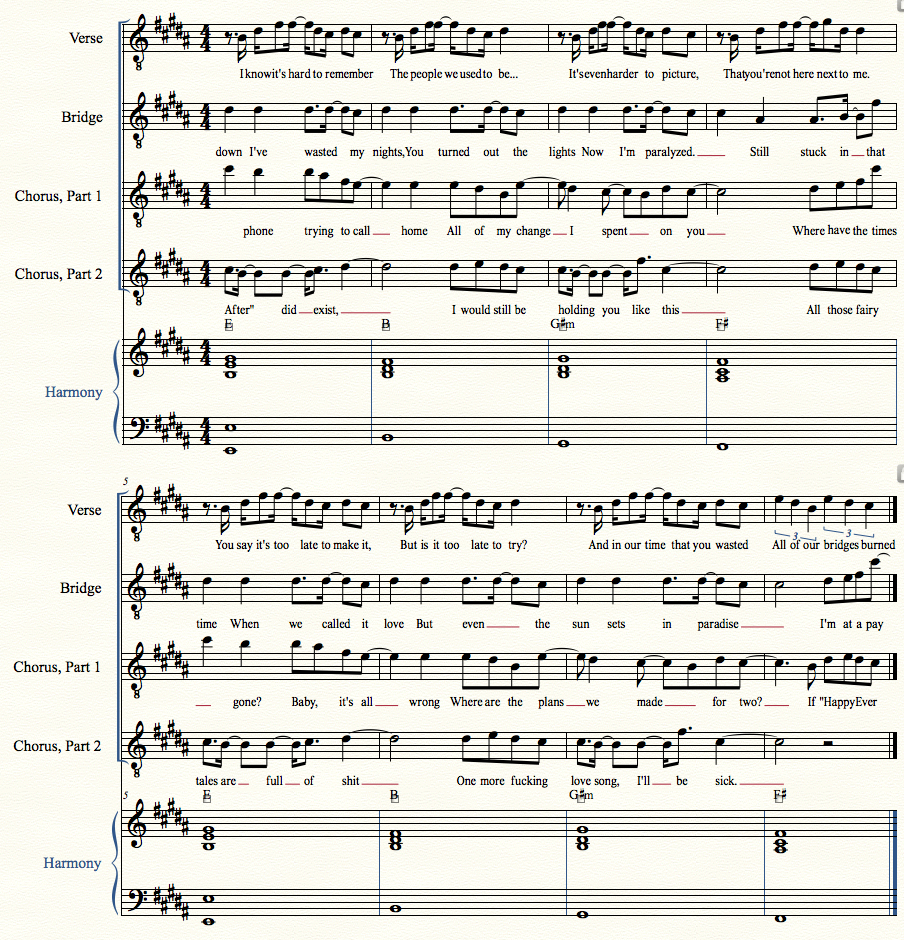 We probably don't need eight bars to get the jist, but check out the different melodies that are utilized over these same four chords. The verse is busy and syncopated, almost always coming to rest on a note that clashes with the chord, and the melody is separated into one-measure chunks by a dotted eighth rest. The bridge emphasizes beats one and two with marcato quarter notes and concludes with a shuffle rhythm that gradually begins to connect one measure to the next. In each of these parts, the melodies are fairly stagnant and the rhythm set to a regular pattern. But then the hook arrives and watch how the melody soars and dives with adjacent measures connected by ties across the barline. Take a moment to savor the dissonance of the E set against the tonic B Major in mm. 2 and 6, a note that refuses to accept that this song is really in B Major. As if that first part of the chorus weren't catchy enough, Levine adds a fourth unique melody supported by some nice drony harmony.

Forget about the stupid Wiz Khalifa rap in the middle and the fact that Levine may as well be singing about a telegraph machine given the virtual extinction of payphones. The joy of this song is found in the way variations on melody and rhythm can thrive in the absence of a substantial harmonic structure. This is real creativity on display whether you like it or not.
Posted by Frank Caravella at 8:17 PM